Age is just a number? Spending power of over 65s is growing but should they be your target market?

Age is just a number. The thing is, numbers don’t lie and one in particular is pretty significant, that number being 21. This isn’t the age I wish I still was, this is the percentage of the UK population that will be over the age of 65 by 2027. To put that into perspective, in 2007 this was 16%. That’s an increase of 31% over the course of 20 years. 21% will equate to approximately 14 million people. We’re living longer, but how much longer? Well the average life expectancy of people living in the UK has increased from around 70 years in 1980 to 80 years today, and continues to steadily increase each year.

Why are we living longer?

Put simply it’s the result of the introduction of public health measures like childhood immunisations, universal health care, medical advances (such as the advanced treatment of heart disease and cancer) and lifestyle changes, including a decline in smoking.

What are the implications of an ageing population for the grocery retail and hospitality industries?

The over 65 age group has seen total household spending sky-rocket by over 70% in the last 5 years through, amongst other things, additional earnings from working longer, guaranteed government pension pots and reaping the majority of the benefits from the housing boom. Over 65s account for roughly 40% of the total spending growth experienced over the last 5 years, compared to 34% of 50-64-year olds.
Average weekly spend figures from the ONS show that the biggest expenditure for UK households is housing (including mortgage interest and council tax), followed by transport (petrol, train season tickets, etc.) followed by recreation and food in 4th and eating out in 5th. Spending on recreation and culture among the under 30s was almost half that of those between 65 and 74, who shell out almost a fifth of their disposable income on this category.
As with everything in life, it’s not as simple as it sounds. Whilst it’s true that, on average, the spending power of over 65s is higher, due to them having higher disposable incomes than their millennial counterparts, there is also a far greater level of inequality between the haves and the have-nots. For example, many pensioners, especially those who rely on disability benefits, which have been sharply cut in recent years, are missing out. In fact, figures from the ONS suggest that inequality among people of pensionable age was heading back to levels last seen at the turn of the century.

“We may be living longer and have more disposable income, but old age does catch up with us in other ways”

The other aspect to consider is the difference between life expectancy and ‘healthy life expectancy’. Although the average person could expect to live to 80 years old, their, average healthy life expectancy is actually 20% less than this. That is, they would expect to spend 16 of these years in ‘not good’ health. Rates of disability-free life expectancy are similar to those for healthy life expectancy. Therefore, we may be living longer and have more disposable income, but old age does catch up with us in other ways – and it’s unrealistic to expect older people to ‘enjoy’ their wealth in the same way as the younger generations.
Nuance is the key word here. Within all age groups and other demographic profiles there are going to be sections which don’t conform to the average. You can’t be all things to all people though, so whilst it remains vital to have a solid grip of the evolving demographics and their associate consumer trends, it’s also important to explore the variations within these groups – certainly the groups which you believe are crucial to the growth and prosperity of your business, both now and in the future.
A great example of such nuance can be found in our latest research report into future UK pub trends. With many news outlets claiming that alcohol consumption is reducing, due to increasing health concerns and the rising costs of going out, a section of the KAM Media Ontrade Outlook 2019 report looks at planned alcohol consumption across the UK for 2019 and it’s impact on the spending power of over 65s and the younger demographics.
We asked 1,000 UK consumers the following question;
“Are you planning on reducing your weekly alcohol intake in 2019?”
Here are the results; 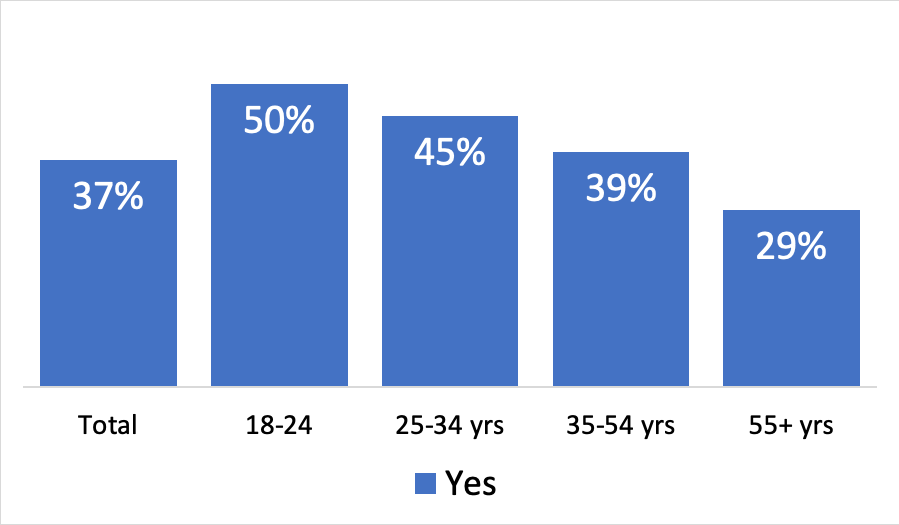 Although 37% of the total population say that they are planning on reducing their weekly alcohol intake in 2019, there is a clear trend towards the younger generations making this change- going from 50% of under 25s to just 29% of over 55s

The assumption here would be that 18-24-year olds would be spending less on alcohol in 2019 compared to the over 55s. However, when we asked them what best describes their drinking habits 20% of 18-24-year olds say that they are “drinking less often but spending more each time I do”, compared to just 10% of over 55-year olds. Furthermore, 40% of 18-24-year olds say they would rather have a premium quality drink less often than frequent cheap drinks – compared to 17% of 55+ year olds. In fact, 67% of over 55-year olds say that they are planning on drinking and spending the same amount in 2019.
Therefore at first glance it would appear that the over 55s will be the one’s driving any growth of UK pub sales as they’re not looking to reduce their alcohol consumption, however they’re also not looking to change their spending habits at all, and although the 18-24-year olds will be cutting back, in essence they’ll be spending more whilst they do and driving the growth of the premium end of the market. Therefore, if you’re a premium drinks manufacturer you need to be aware of this trend to fully understand how to capitalise on the opportunity.
So, which is the most important demographic to target in order to grow sales and future protect your business? What is the relative spending power of over 65s, Gen Z, Millennials, Baby Boomers, etc.? Well it depends on what you’re selling and why you’re selling it. As true now as it has ever been. The difference now is that there’s much more information and insight available to help understand the answers to these questions in more detail. Understand the nuance. For age is just a number but it isn’t the only number you need to know.