Lockdown is changing the longer-term habits of beer enthusiasts

New research shows that beer enthusiasts are more open to trying new and different beers than ever. 91% having tried a beer that they’d never consumed before in the last two months alone. Beer drinking habits are changing.

Feedback from 800+ craft & modern beer consumers in October has identified that the changes in their behaviour bought on by the first lockdown are sticking. They are continuing to trial new brands, purchase from new places and actively seek out local and independent beers.

The ‘Beer Enthusiast Tracker’ from Brew/LDN and KAM is the first of a new bi-monthly series of reports. The series will track the consumption behaviours, attitudes and trends of craft & modern beer consumers in the UK. This follows an initial study which focussed on their habits during the first lockdown. For the purpose of the research the respondents are defined as “beer enthusiasts”, i.e. those who regular consume beer and enjoy beer as a hobby as well as just a drink.

The first lockdown saw a surge in support from these ‘beer enthusiasts’ for local tap rooms and breweries. 79% said they were increasingly interested in supporting local breweries. 31% purchased more direct from physical breweries and tap rooms during lockdown. This is one trend which looks to be sticking with an impressive 54% having purchased from a tap room or brewery in the last 2 months (before the second lockdown commenced.)

“Without a doubt 2020 has given the beer enthusiast an opportunity to take stock and evaluate their traditional, ingrained behaviours. The first lockdown sparked an interest in beer enthusiasts wanting to search out unique and interesting beers and to support local breweries. This latest research suggests that the thirst for “something different” isn’t going away any time soon!”

The beer enthusiasts were, unsurprisingly, keen to support pubs and bars when they re-opened in July. Two thirds said they intended to visit a pub at least as frequently as normal. And they did not disappoint with 88% saying they had purchased beer from a pub or bar in the last 2 months. Indeed only 78% had purchased from a supermarket.

The study also showed that a much higher proportion of ‘beer enthusiasts’ are now drinking nearly daily compared with pre-March lockdown when only 5% said they drank more than 6 days a week. This figure rose to 19% during the first lockdown and in the last two months has only fallen back to 16%. But no need for a moral panic here- many are generally only drinking 1 or 2 beers a day! 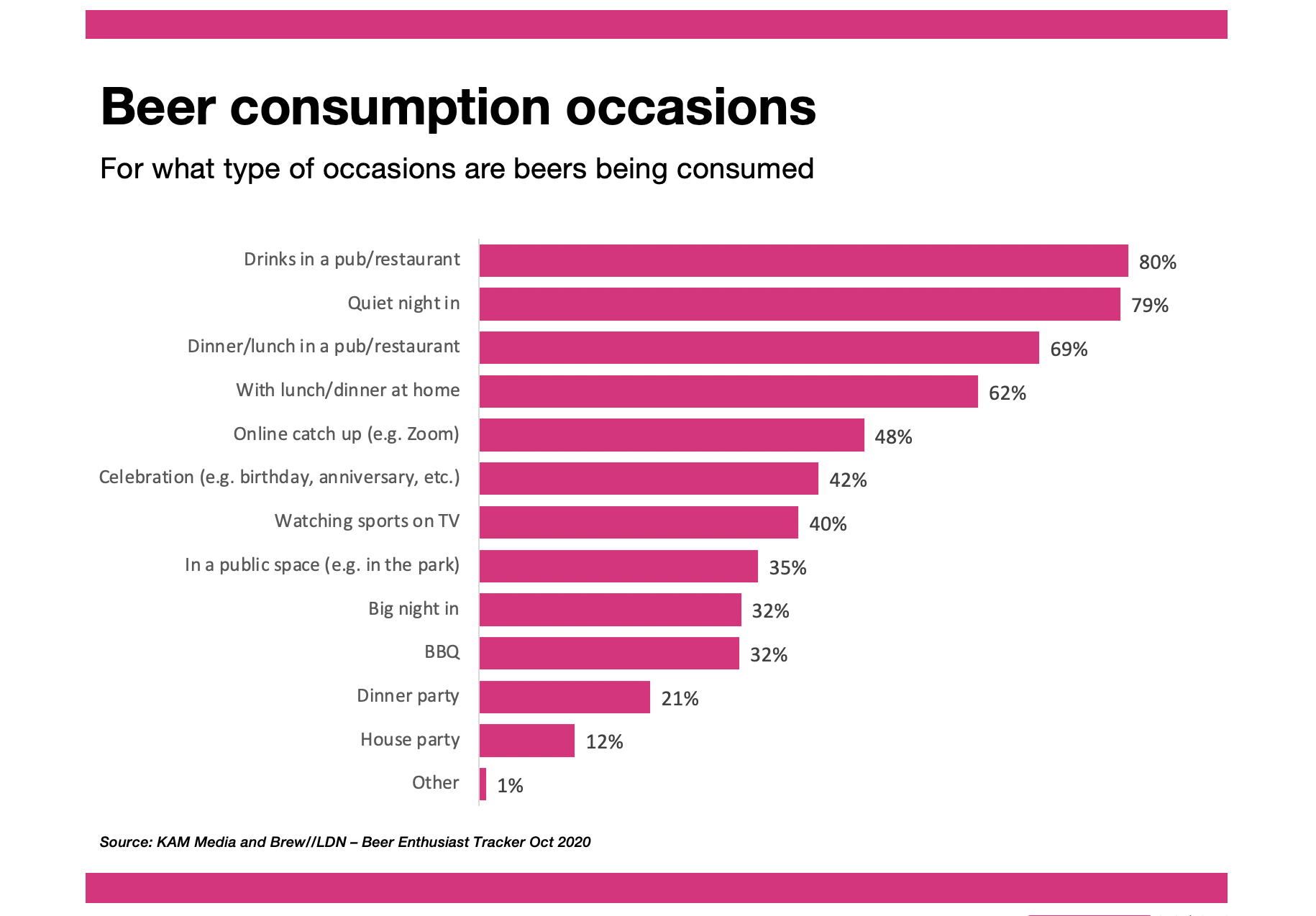 Many drinking occasions have moved out of the on-trade for obvious reasons, with 48% having drunk beer at home during an ‘online catch up with friends’ (ie social Zoom call), 40% while watching sports on TV and 35% say they have consumed beer in a park during the last two months.

This new breed of beer enthusiasts is definitely one to watch. They are more curious and adventurous when it comes to how they interact with the category. Understanding the increasingly diverse drinking occasions will be critical to brands and operators in both the on and off-trade. Their habits changed fairly drastically in the first lockdown and this latest research shows some of those habits are here to stay.

If you’d like to find out more about the new research series into the “beer enthusiast”, please contact katy@kam-media.co.uk. There will be opportunities to ask bespoke questions specific to your needs and brands. Or download the first report here.

Want to ask a specific or bespoke question to our “beer enthusiast” panel? Interested to hear what they think of your brands?